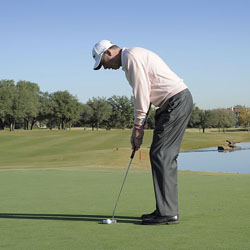 According to IonLoop’s golf expert,Tim Cusick in his article for Avid Golfer, “The belly putter stole the show in 2011 on the PGA TOUR.” If you are beginner and not sure what a belly putter is, let me explain. A “belly putter” is a putter that has a shaft longer than the average putter. It carries this name because, to use a belly putter, the golfer uses his stomach as an anchor.

As Tim describes in his article, while the traditional golf triangle consists of the golfer’s alignment of shoulders, hands, and arms, the belly putter form is made by the golfer’s arms and stomach. Belly putters didn’t have the best reputation amongst golfers and was often seen as a golfer’s last resort, when nothing else was working.

However, as Tim states, “nowadays, it seems everyone is using it regardless of their putting prowess.” Despite the controversy about the purity of the game, belly putters are legal under golf rules and many PGA tour pros have been taking advantage of this tool on the course.

Cusick names Keegan Bradley, 2011 PGA Championship winner, as a prominent PGA pro who used belly putters this year. A far cry from an older guy with the yips who’s trying to salvage a lost game. He also points Bill Haas, Webb Simpson, and Matt Kuchar as having contributed to the “upraise of the belly putter,” in 2011.

For those interested in adhering to the belly putter movement, Tim Cusick shares pointers as he has been experimenting with it for the last month. Click here to go to his Avid Golfer article and see step-by-step instructions on using the belly putter and some informational images as well.

Can a Bracelet for Pain Help with Arthritis?

Arthritis is a painful condition that affects millions of people around the world. Unfortunately, most sufferers must rely on addictive pain pills or risky surgeries to make it through the day. It’s no wonder why so many people are looking for safer and more effective options. One alternative therapy those with arthritis stumble upon is known as a therapy bracelet. These wristbands are typically made with magnetic technology or minerals that generate negative ions. Many wearers report a considerable amount of pain relief, sometimes in as little as a day! While there is only a limited number of scientific studies on these bracelets, there appears to be countless glowing testimonials on their benefits.