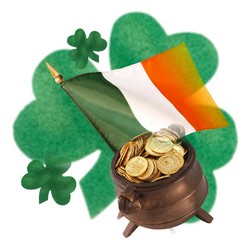 When they are not making shoes or guarding treasure, the tiny green gnomes are known to be merry-makers who drink, dance, and play music which seems to tie in nicely to late nights and Irish songs at Pubs throughout the world each March 17th. Perhaps the beer industry is guarding the Pot of Gold?

Make your own luck this week and check out our St. Patrick’s Day Specials at discounted prices through March 17th, 2013.

We all love to celebrate a wee bit on St. Patrick’s Day… drink green beer while wearing the coolest green gear! And there’s no cooler St. Patty’s Day accessory than an IonLoop bracelet!

Our team put together some awesome “St. Patrick’s Day Specials” this week! While creating special edition IonThins PAKS and a super special Irish Necklace, we stared talking about Leprechaun’s and how these petit little guys with the funny hats and all that gold got started.

It seems that the name was derived from the Irish term "leath bhrogan," meaning shoemaker, according to the site IrelandsEye.com. Other folks in Dublin believe the word comes from the term "luacharma'n," which means pygmy. And yet some say the mythical figures are named after the Celtic god named Lugh, pronounced "Luck”.

The Pot of Gold reference seems to be historically tied to these fairies guarding the treasure believed to have been buried by the Danes who conquered Ireland in 853.
The one detail that seems to be universally accepted is that these little guys hail from Ireland, where they make shoes and wreak havoc on unsuspecting humans.

The legend that has been passed on for centuries is that if you can actually touch a Leprechaun you will have good luck for all your days ahead. Here at the IonLoop Texas headquarters we believe that if you touch a Leprechaun that is wearing a green IonLoop bracelet “y’all will be driving a gravy train with biscuit wheels”.


What Are the Advantages of a Bracelet for Pain?

Negative ion and magnetic bands are growing increasingly popular with athletes, stay-at-home moms, college students, busy entrepreneurs, and so many more. But did you know that alternative health doctors also recommend these wristbands for pain? Yep – you heard that right! There are many patients using these special bands to help relieve their pain throughout the day and while they sleep. Traditional and scientific use of magnets have shown some potentially interesting effects that may help with inflammation and pain. They also make a great conversation piece as the history behind magnetic jewelry is fascinating!