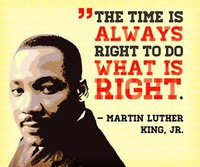 Martin Luther King, Jr. Day is observed on the third Monday in January, around the time of King's birthday, January 15. In a few weeks we celebrate MLK Day on January 18th 2016.

The campaign for an official holiday in King's honor began soon after his assassination in April 1968, and was signed into law by Ronald Reagan in 1983. The federal holiday honors Dr. King’s immense contributions to America and mankind.

Martin Luther King, Jr. (January 15, 1929 - April 4, 1968) was a Baptist minister and civil rights activist known for nonviolent protest against racial discrimination in United States federal and state law. In 1963 he gave his famous "I Have a Dream" speech during the March on Washington led by Dr. King. In 1964 he was the recipient of the Nobel Peace Prize for his work, which later expanded to include combating poverty and seeking an end to the Vietnam War.

Dr. King was known to have said “Life’s most persistent and urgent question is: What are you doing for others?”

It is the spirit of those words that inspired the national Martin Luther King Day of Service, where Americans across the country come together on the King Holiday to serve their neighbors and communities.

Not only for remembrance, education, and tribute, the MLK holiday is also a day of action. It is a day of joining your neighbors to feed the hungry, beautify parks, and to celebrate love and tolerance through giving.

About a third of employers give workers the day off, which many spend at parades, speeches, or relaxing with family. If you have time off or choose to take off to honor the day, the National Service Day website has a searchable database of places to serve in your area, from soup kitchens to Big Brothers and Big Sisters programs.

We hope you can get out and serve within your community this year. You can also celebrate healing and hope with an ion energy band of the same message.