Evil Winds: Can Positive Ions Increase the Rate of Crime? 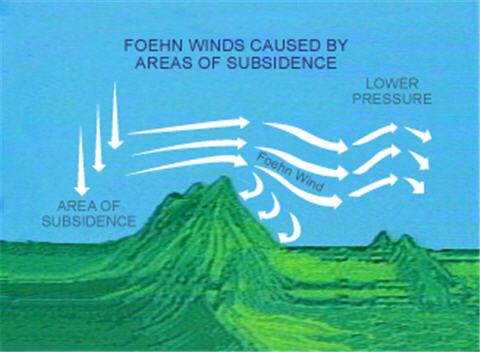 How Positive Ions Can Negatively Impact Our Moods

In most courts around the world, that kind of defense likely wouldn’t work well. But in Austria, judges have been known to hand out lighter sentences for criminals claiming to be under the influence of evil winds, otherwise known as the Foehn.

A foehn is a type of dry wind that occurs near mountainsides. Numerous locations throughout the world are affected by these types of winds, but one area has gone as far as blaming the winds for the uptick in crime rates. According to popular theory, the winds contain large quantities of positive ions, which have been hypothesized to negatively affect the mind.

Positive ion counts are often at their highest in congested cities, offices, polluted areas, near electronic devices, and more. Continual exposure to positive ions is thought to exacerbate conditions like depression, stress, and anxiety.

When the Foehn Blows, Crime Goes Up

In areas of Austria and Switzerland, an increase in crime is seen during the Foehn. Researchers have even documented a 20% increase in suicide rates during the event.

Throughout the Alpines, locals have branded the phenomenon “Foehnkrankenheit”, meaning Foehn sickness.

The Benefits of Negative Ions: Counteracting the Effect of Positive Ions

Whether the Foehn is truly responsible for the increase in crime and mental illness is up for debate. The locals, however, remain convinced that when the Foehn arrives, so does the crime.

Fortunately, the benefits of negative ions may have the potential to offset the harmful effects of their counterpart, positive ions.

Studies have shown that negative ions have a beneficial effect on body and mind.

While you won’t find a negative ion generator large enough to cover Austria, you can wear ionic bands, which may help reduce the harmful effects that positive ions have.

Certain areas found in nature also have high levels of negative ions, including beaches, forests, and waterfalls. This may explain why many people report a calming and rejuvenating feeling when they spend time outdoors.

Although there’s no way to completely avoid positive ions, you can make smart decisions like spending more time outdoors or wearing a negative ion bracelet to help promote better physical and mental wellness.