The Official Bracelet of the 2012 Ryder Cup 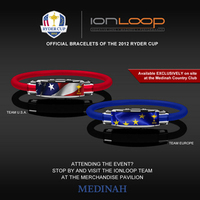 Week after week the finest golf professionals compete under familiar circumstances’…almost a sameness, week in week out. Every other year these champions set aside the PGA Tour routine to compete in golf’s most emotionally charged affair; The Ryder Cup. This biennial tournament starts tomorrow, September 28th and goes through the 30th, 2012.

This year, the Americans have the home field advantage at the Medinah Country Club, in Medinah, Illinois. The U.S. team is headed by team captain Davis Love III, a Ryder Cup veteran with 26 matches played since 1993. He will lead names like Keegan Bradley, Phil Mickelson, and Tiger Woods.

The European captain is José María Olazábal, an experienced Spanish golfer with a total of 31 matches played who “shares with Ian Woosnam the record for most fourball points with 10½.” Golf fans recognize how special this event is and flock to the course to “participate” in the excitement.

IonLoop was fortunate enough to be asked to take part in the merchandise effort at Medinah. This week we are offering 5 exclusive bracelet designs as well as iPhone and iPad covers…all bracelets sporting the official 2012 Ryder Cup logo. The USA Team was provided Red Stars & Stripes bracelets that may be worn by the pros during the event, keep an eye out! USA, USA, USA… The Europeans, also got their exclusive IonLoop bracelet designed with the teams royal blue and yellow stripes.

Our ion bracelets have become a staple of these events and our team loves taking part of such major tournaments year after year. We have made friends and die hard Loop fans everywhere we traveled… so much fun.

Can a Life Strength Bracelet Actually Make You Stronger?

Wondering if a strength wristband can make you stronger? While it probably won’t give you the ability to lift an extra hundred pounds, you might notice other benefits. Wearers of these bracelets often report improved recovery times and increased resilience to stress. These positive effects can likely be attributed to the benefits of negative ions or magnetism, depending on what type of bracelet you choose. In some cases, bracelets might be crafted with both technologies in one! If you’ve ever noticed weightlifter at the gym or athletes wearing one or more wristbands, they’re likely using one of these strength bands.