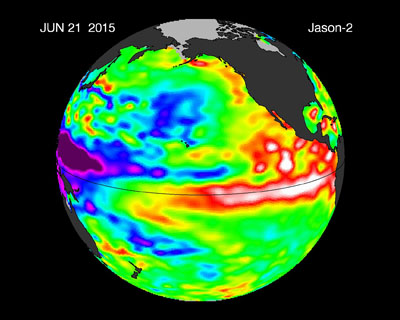 Do you remember more about El Niño than just the legendary Chris Farley skit? You may know that it caused approximately 23,000 deaths and $35 billion dollars in destruction.

The name El Niño was inspired in the 1800s by Peruvian fishermen, who noticed a mysterious warm current that sometimes appeared around Christmas. They called it the "little boy" or "Christ child."

What is an El Niño?

El Niño is a weather phenomenon that occurs (irregularly) in the eastern tropical Pacific every two to seven years.

Caused by weakened east-to-west trade winds, sea surface temperatures rise and can set off a chain of weather impacts, from mudslides to drought to fires and more. Like most weather patterns, an El Niño’s strength may vary.

It was the sheer size of the 1997 El Niño that got everyone’s attention, and that made its existence common public knowledge. It was the strongest El Nino since detailed record keeping began in the 1950’s, and the last really massive one to date.

The storm pattern had dramatic effects worldwide including devastating flooding in the western U.S. and drought in Indonesia. It was also blamed for rising coffee prices around the world, and outbreaks of deadly virus in Africa.

What It Could Mean This Winter

For the past year, Scientists have been carefully monitoring a particular area of the Pacific Ocean along the equator, and if predictions ring true, we could be on course for a very large El Niño later this fall or this winter. In August, the National Oceanic and Atmospheric Administration announced that this year's El Niño is "significant and strengthening", and likely to last into 2016.

Potential effects of a record-setting El Niño year could include drought for Australia, rain for California, a warmer winter in the US, potentially destructive flooding in Peru, as well as some very hot weather worldwide.

Nothing’s guaranteed, but this yea has already seen 5 super typhoons in the Western Pacific (compared to 1 by this time in a normal year), and as recently as a few weeks ago, Hurricane Patricia, a Category 5 Hurricane and the strongest ever recorded in the western hemisphere, struck land in western Mexico.

Don’t let this stop you from getting out there and enjoying your favorite things, but please stay informed and stay safe this season!