What are Positive and Negative Ions? 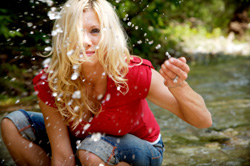 What are Positive and Negative Ions After all?

The Different Effects of Positive and Negative Ions


Studies suggest that positive ions generally have a negative effect on our bodies. According to author of “The Ion Effect,” Fred Soyka some of these effects are inhibition of growth of tissue cell cultures, increased respiratory rate, headache, fatigue, and nausea.
On the other hand, negative ions reportedly increase the flow of oxygen to the brain, which results in higher alertness, decreased drowsiness, and more mental energy, according to Pierce J. Howard, PhD, author of The Owners Manual for the Brain.

Have you experienced the Effects of Positive and Negative Ions?


Have you ever thought why we feel so good walking in the woods, on a beach or near a river, breathing the fresh air in the mountains, or just breathing the fresh after-rain air? This feeling of rejuvenation comes from the production of negative ions.
Unfortunately, the environment we live in today has far more sources of positive ions than in the past, creating an electrical imbalance in the air and our bodies. Electronic devices that surround us give off high levels of damaging positive ions and we become trapped in concrete building that shields the interior of buildings from the ionization that naturally occurs in the atmosphere, says study by Miloslav Jokl.
The introduction of negative ion technology can combat the harmful effects of positive ions bringing balance and producing great benefits to our lifestyle.

What Do Magnetic Bracelets Do?

Our ancestors knew well the healing potential of magnets. Ever since magnets were discovered thousands of years ago, cultures from around the world relied on their healing powers for a wide variety of ailments. In the last 100 years, dozens of studies have been performed on magnets, including some on how they affect cancer cells, osteoarthritis, diabetes, and more. Now, many countries around the world have accepted magnets as a medical device that can be prescribed. While there are limited scientific studies about magnetic healing, history and current evidence indicate that magnetic bracelets may have therapeutic potential.