The Junior Cycling Team and Starts the Season with a Win 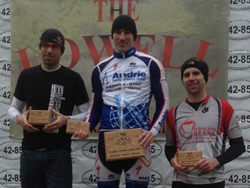 We are thrilled to share with our readers that IonLoop is now a sponsor of the Andrie/Machine-Star Junior Cycling Team. The opportunity to be involved in this project was presented to IonLoop by Brant Hendler, the team coach and 4-time National Cycling Champion. His credentials and the team’s potential made this a sponsorship opportunity that IonLoop could not pass up!

Hendler served on the coaching staff at the University of Colorado, worked with several riders who earned individual collegiate National Championships, and helped coach the team to overall National Championships in 1999 and 2000. The team was created to develop junior riders in Michigan and prepare them for Junior Road Nationals in 2012. Our team is excited with the opportunity to support this great team and help 10 teenage riders to develop character, responsibility and confidence through competitive cycling.

The Andrie/Machine-Star Junior Cycling Team is made up both male and female, between the ages of 13 and 18. During the 2012 season, they will compete at major regional races, the Junior Road Nationals and several local races throughout Michigan, Indiana, Ohio and Illinois.

“Our biggest goal, in terms of cycling, is to make sure these riders understand the basic principles of racing a bicycle. This includes everything from tactics, to safety, to good sportsmanship” said Hendler, “riders who understand these principles will be better prepared to succeed.”

The Lowell 50 Road Race on March 31st marked the start of the 2012 race season for the Andrie/Machine-Star Junior Cycling Team. Much like the spring classics raced in Europe the Lowell 50 race route featured several dirt sections. Luke Harvitt, 18, out of Grand Haven, MI was the only entrant this weekend since the majority of the team headed off for warmer riding weather while on spring-break.

Coach Hendler shared with us that Luke rode his bike to near perfection in the 28 mile race as he found himself in the lead group after the field of 128 riders narrowed itself down to a small group of approximately 15-20 riders. The uphill finish played out perfectly as Luke lead the group through the Historic Fallasburg Covered Bridge and up the final climb to the finish.

Congratulations, Luke, on a great start to the season!

Why buy a magnetic bracelet for women? Simple! Not only are they attractive, they may have a potential healing effect thanks to the benefits of magnetism. Ever since ancient times, cultures around the world have relied on the use of magnets to cure various ailments and even to stay youthful! While there are only a limited number of scientific studies that demonstrate their potential, there are countless positive testimonials from people who love wearing their magnetic bands. Whether you’re looking to see if magnetic therapy can benefit you or you just want an attractive wristband, try out an IonLoop today!