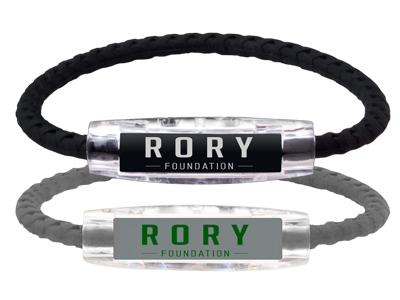 The 2015 Irish Open Hosted by The Rory Foundation will be held from May 28-31 in McIlroy’s native Northern Ireland at Royal County Down; a venue where the Champion has played many rounds of golf.

The Rory Foundation, which was set up at the start of last year to raise funds for children’s charities across the world, will also become the tournament’s official charity, with the beneficiaries to be chosen by the Foundation in conjunction with The European Tour. Rory has enlisted the help of the world’s finest golfers which will give this event immediate golf fan interest.

IonLoop has provided the special Rory McIlroy bracelets to be given to all pro-am participants and invited guest. “This event will be a great way to raise additional funds to help kids with very serious illnesses; we are happy to play a small part” said Bob Gotfredson IonLoop Co-Founder. “I met Rory in 2007 at Carnoustie when he was just a teenager and have watched him sharpen his golf game and develop his commitment to help others” said Gotfredson. The Rory Foundation & the Cancer Fund for Children, is located a short distance from Royal County Down, in the town of Newcastle.